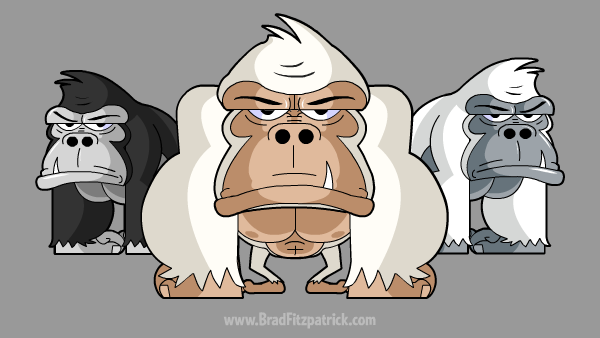 A client commissioned me to convert my cartoon gorilla character into an albino gorilla, so I figured this would make for a semi-interesting post.

He ended up going with the center color scheme, which I really like… almost better than the original black version.He’s in a similar vein as the legendary Snowflake (the most well-known albino animal that ever lived, btw) but less pink.

I also like the cooler white version on the right, he makes me think of Bumble the abominable snowman from Rudolph.

I might continue with that direction and create a cool yeti character, which is something I’ve always wanted to have in my collection.

WELCOME! Thanks for stopping by, I'm glad you made it here safely... it's a sketchy world out there. You've arrived at  the online portfolio and virtual playground of  Brad Fitzpatrick. Have a look around. If you like what you see and think I can help you with your next Cartoon Illustration, Flash Animation, or Character Design project... don't hesitate to get in touch!