How to draw a fist… palm side up… 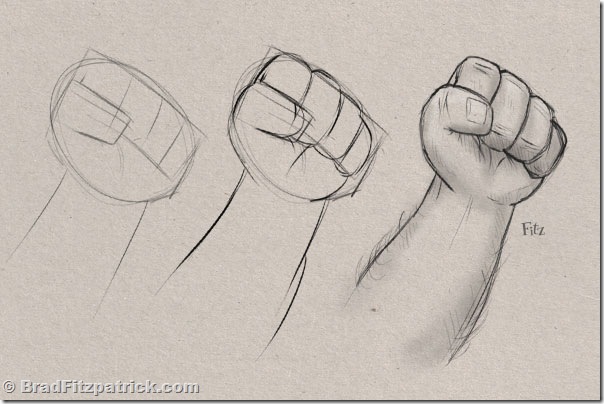 Draw what you see, not what you think is there.

Here’s a time-lapsed video of my good buddy Chris Georgenes over at his Keyframer blog drawing a cartoon pig. He’s drawing this in Autodesk’s SketchBook Pro

I get quite a few emails from aspiring artists and cartoonists looking for direction on how to either improve their drawing style or how to get started in the craft of cartooning.  I generally have one cartoon drawing instruction resource that I send them to because it’s the one that has helped me out the most.  The resource is all the books Christopher Hart has published. This guy is great for people looking to improve or learn how to draw cartoons no matter what style you’re interested in learning. Here is an example of a recent email correspondence I had with an aspiring cartoonist.

Hey Brad,
I sketch cartoons and do personalized portraits, babies and stuff like that. When it comes to cartoons there’s not much I can’t draw but, my creativity is weak. My brother is a comedian and we have decided to start making a cartoon comic strip for the local paper and see how it does. The jokes are great but, i need some helping with creating some characters for the story line. If you can assist me in this please let me know.

Hey Andrew, thanks for the note. The best direction I can point you in is to a guy named Christopher Hart and his great instruction books, here are some links….

This is the book I would start you with: "Drawing on the Funny Side of the Brain" – http://bit.ly/8MZi6y

And here are the rest of his books, all are really great and helpful. – http://bit.ly/6AEEyL

Hope this helps!
Cheers.
~B

Brian over at Copyblogger says you guys don’t want to know *what* I can do, you want to know *how* I do it.. So let’s see if he knows what he’s talking about. I’m going to show you how Blaugh cartoons are brought to life… with super cool grainy videos and everything.

If you don’t know yet, Blaugh is a *ahem* daily cartoon produced by myself and Chris Pirillo – Chris writes, and I draw…usually. We’ve tried it the other way around but… it really didn’t work out. Blaugh is sponsored entirely by GoDaddy, and as long as you giys keep showing your support by using the coupon code “Blaugh” when you buy stuff over there, it’ll be a good long relationship.

Okay, on with the goods.

Just about all Blaugh cartoons start from crazy voices from deep inside Chris’ head. Once he escapes the straightjacket, which Ponzi says he’s getting really good at these days, he’ll shoot me off about a week’s worth of material in an email.

I always look forward to these emails from Chris because they remind me so much of Christmas. After I read the new gags a few dozen times (and then stop crying) I enter them into my Backpack account…. (I love Backpack and use it to organize all my ten-dollar ideas that I’ll never have time to get to.) I like being able to check off gags as I go and having them all stored in one spot is quite handy. It’s a pretty slick little app and a great way to work, you should give it a try.

Now this image here is a good example of what a typical Blaugh sketchbook page looks like.. (click it to enlarge) I flesh out the visuals of a gag by starting with a tiny thumbnail concept sketch doodle. I then randomly focus on the characters, props, and background elements, not worrying too much at all about composition at this stage. For those of you keeping score at home I use Carmine Red Col-Erase colored pencils made by Sanford. These things have changed my life but I’ll save that geeky illustrator topic after all the new viewers go back home.

When I get to the point where I think I have everything I need to put it all together, I’ll either scan in the messy sketchbook page or redraw it entirely… I usually just scan in the unordered page like the one above and re-arrange the composition using photoshop, but I re-drew this one today because I’m trying to impress you… plus I wanted to make a cool video. (click here to see the video of me sketching it)

After scanning in the sketch, I import it into Flash on it’s own layer, and then I use my tablet pc to vectorize the final art on the layers above it. Not exactly the traditional vector artist technique, but it works just splendid for me. I have yet to find another vector program out there that can come close to matching the solid drawing tools in Flash. (click here to see video #2)

So that’s about the jist of it, check out the videos and keep in mind that they’re sped up and edited to keep them short so you’ll finish them to the end where there’s a clickable Revver ad. Enjoy the show, turn up your volume, and leave me comments.

Video Run Time 3:45 – Here’s another video demo of me drawing, this time the subject is one of my cartoon dog characters. I’ve been scoping out the digital camcorder scene, what a deep pond of water that is. After a bit of research I’ve got my eye on a few models, the Panasonic PV-GS300 in particular. Enjoy the video and if you’ve got a comment or suggestion, I’m all ears! (click here if you can’t see the video below)

I enjoy watching other artists draw stuff so I figured I’d dust off the old video camera post something of my own. There’s no audio… maybe I’ll get brave enough and slap a mic on for the next one… Enjoy! (click here if you can’t see the video below)

When I was a kid I loved watching Mark Kistler’s Imagination Station on PBS. I remember looking forward to the show because his style and personality really resonated with me. I particularly loved the last segment of the show where he had this huge cartoon mural that he’d work on for about 10 minutes each week with a sharpie. Always creating new sections of funky worlds of spiral staircases inhabited by wacky creatures..

that rock! As I was thumbing through them I was overcome by a wave of nostalgia. When I got home I looked him up on the web and found he’s got a pretty cool website too. If that wasn’t enough, he’s got an actual streaming video of one of his shows for free viewing! Awesome. It doesn’t look like he’s changed much over the years … other than replacing his drawing/space suit covered with pen & marker holders with some red suspenders. Same great personality though. 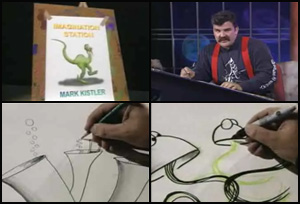 Although like every other intelligent person on the planet I despise everything Adolf Hitler ever stood for. Subject aside, I think it turned out to be a nice caricature. Since it was such a simple design I thought I’d record the process of finalizing the art. Enjoy the process, not the subject…. Cheers. 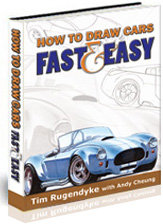 I’ve been playing aroung a bit more with creating drawing demos… here’s another video showing how to draw a car in Flash. This one is in swf (Flash) format, if you experience any issues please let me know in the comments area below. Thanks!